Originally scheduled for March 28, 2020,  ticket holders will be notified as soon as this event is rescheduled.

The 19-20 season continues with an exciting program that features a Grammy Award winner and timeless compositions.

Edward Elgar’s overture In the South opens the program with a boisterous theme re-purposed from another work, which joyfully expresses his experiences with his family in Italy.

The soloist for the evening, Grammy Award-winning guitarist Jason Vieaux,  performs Joaquín Rodrigo’s well-known Concierto de Aranjuez. Rodrigo was blinded at a very young age, but this challenge did not hinder him from composing his gold standard guitar concerto, inspired by the sounds and fragrances of the Royal Gardens of Aranjuez, Spain.

Johannes Brahms’ Symphony No. 2 finishes out the evening. Written not long after his first symphony, at the inspiring backdrop of a vacation in Pörtschach, Austria, Brahms let the environment influence his cheery symphony which will sweep the audience away with its jubilance. 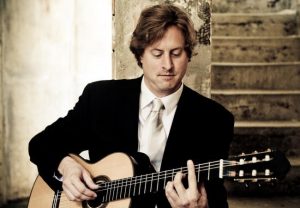