In the Oasis Room
Invite a Friend:

José B. González is the author of the award-winning,Toys Made of Rock and When Love Was Reels, and the co- editor of Latino Boom: An Anthology of U.S. Latino Literature. He has been anthologized in the Norton Introduction to Literature, The Wandering Song: Central American Writing in the United States, and Theatre Under My Skin: Contemporary Salvadoran Poetry and has presented at colleges and universities throughout the U.S. A Fulbright Scholar, he has been featured of the syndicated show, American Latino TV, Univision, and NPR and is the editor of LatinoStories.com. Born in El Salvador and raised in New London, part of his life has been documented in the first exhibit of Latinos at the Smithsonian Museum of American History. 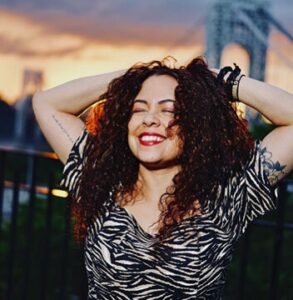 Dr. Grisel Y. Acosta’s poetry collection, Things to Pack on the Way to Everywhere, was a 2020 finalist for the Andrés Montoya Prize. She is the editor of Latina Outsiders Remaking Latina Identity (Routledge, 2019), an anthology featuring over 30 scholarly and creative works by Latinas from throughout the United States. She has presented and published her creative and scholarly work in London, England; Cartagena, Colombia; Catalonia, Spain; Buenos Aires, Argentina, and throughout the United States.  She is a Geraldine Dodge Foundation Poet, a Macondo Fellow, and the Creative Writing Editor at Chicana/Latina Studies Journal.

Melissa Lozada-Oliva is a Guatelombian (Guatemalan-Colombian) American poet and screenwriter living in Brooklyn by way of Massachusetts. Her book peluda (Button Poetry 2017) explores the intersections of Latina identity, feminism, hair removal & what it means to belong.