FREE RENTY tells the story of Tamara Lanier, an African American woman determined to force Harvard University to cede possession of daguerreotypes of her great-great-great grandfather, an enslaved man named Renty. The daguerreotypes were commissioned in 1850 by a Harvard professor to “prove” the superiority of the white race. The images remain emblematic of America’s failure to acknowledge the cruelty of slavery, the racist science that supported it and the white supremacy that continues to infect our society today. The film focuses on Lanier and tracks her lawsuit against Harvard, and features attorney Benjamin Crump, author Ta-Nehisi Coates and scholars Ariella Azoulay and Tina Campt. 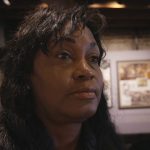 A 27 year veteran of the State of Connecticut Judicial Branch, retiring in 2017 as a Chief Probation Officer, Tamara K. Lanier has a long and distinguished record of public service and social advocacy.

She has been a Commissioner for the City of Norwich Ethics Commission; a member of the U.S. Attorney’s working group to monitor federal and state civil rights compliance with educational institutions; and engaged with Connecticut’s Racial Profiling Prohibition Board. In 2015, Lanier was named Woman of the Year by the Connecticut General Assembly’s Commission on Afro-American Affairs. In 2016, she received the Connecticut Commission of Human Rights and Opportunities’ Leaders and Legends Award, and in 2019 its Inspirational Women’s Award. Currently, she is the Vice President of the New London NAACP, and was recently appointed by Governor Ned Lamont to the States first Hate Crime Advisory Council.

Jill Ellen Abramson is an American author, journalist, and academic. She is best known as the former executive editor of The New York Times; she held that position from Sept 2011 to May 2014. She was the first female executive editor in the paper’s 160-year history.

Attorney Josh Koskoff, in addition to representing Tamara Lanier in her groundbreaking case against Harvard, Josh currently represents nine families who lost children and loved ones in the Sandy Hook School shooting against Remington Arms Company.

Preston Tisdale is a top-ranked and award-winning lawyer, with more than 44 years of experience, He currently serves on the board of governors of the CT Trial Lawyers Assoc. and the American Assoc. for Justice as well as on the CT Comm. on Racial and Ethnic Disparity in the Criminal Justice System.

MODERATOR: Karen Florin is the Audience Engagement Editor at The Day. Florin was a reporter for 25 years, focusing most recently on the court system. She was a longtime member, and co-chair, of Connecticut’s Judicial-Media Committee.

“A narrative of survival and resolve.”