After 77 years, the 1945 classic Warner Bros. movie
Christmas in Connecticut
returns to the giant screen of the Garde movie palace!

This special event also features a lively pre-show discussion with Goodspeed Musicals’ producer and creative team behind their new musical Christmas in Connecticut.

Be one of the first to hear a song from the musical before its
premiere at the Goodspeed this holiday season!

Reserve your FREE SEATS today!
A gift to you from generous community sponsors. 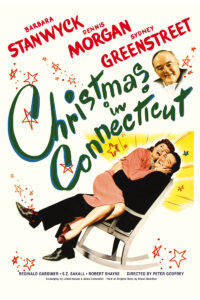 Barbara Stanwyck stars as Elizabeth in this delightful romantic comedy as the “Diary of a Housewife” columnist who has lied about being the perfect housewife.   Her articles about her fictitious Connecticut farm, husband, and baby are admired by housewives across the country.  She must try to cover her deception when her boss and a returning war hero invite themselves to her home for a traditional family Christmas.

Goodspeed invites you to spend a very merry… Christmas in Connecticut!